Vassilis Moskovis introduces, while travelling in the heart of the western Mani, the relevant with the area project of the famous lawyer and writer from Mani, Jianni Mantouvalou.

After Areopoly, Pyrgo Dirou on the way to Gerolimena we meet a crossroad to the left. The uphill cement road takes us to Kato Boularioi, Diporo, Pano Boularioi. These are picturesque traditional villages made of stones with great history. The name Boularioi derives from the city Ippola, as we learn from ΗLakonikaΘ by Pausania.

The three villages of Boularioi are divided with a canyon. The elders remember the rain in wintertimes when the torrent  made it impossible to cross the canyon.

We will begin from Kato Boularioi, which is the nearest village to the central road. It is a village full of magnificent stone towers and probably it is more contemporary than the others. Yet, the history of the villages is similar. This is shown in the short poem: ΗGlory to Pano Boularioi and glory to Kato Boularioi!.

St. Jiorgis is found near the family cemetary of Koukourianoi; it has one arch and a constructed temple on the south part. The frescos must be of the 13th Cent. (N. Drandakis). St. Peter is in good condition built in a simple way architecturally. The nearby ruins show that there used to be an old monastery and that the church is built in the same place. It is decorated with excellent frescos (some are covered with whitewash), while the temple is built and the church tower is a fine piece of work.

Finally, the latest church in Kato Boularioi, which is also built on an old one, Panagia, has the fresco of St Jiorgi riding a horse and killing the dragon.

After ΗKato Boularioi, our travel goes on in Diporo, where one can see the astounding monument of the Macedonian soldiers (Madouvalei and Fragoyiannei) created by the sculpturer Petros Georgarios and the mechanic Rika Madouvalou, 2-3 years ago.

In the village Diporo, there are great churches, some in good condition and some deserted, which justify, though, the characterisation of Diporo as the Ηsmall Mystra of Mesa ManiΘ, according to the writer Yianni Madouvalo.

* ΗAi Spyridon is the monastery of the Veletakos family of the 17th Cent, which is full of frescos, in the inner part.

* ΗAi Yiannis is a medieval church of the Pragiati Family.

* ΗAi Panteleimon of the 8th Cent (according to the professor of Vyzantine history, D. Drandakis). The frescos inside the church are samples of pure folklore art and the product of inspiration of the local talented painters.

Professor Dandrakis writes that ΗAi Panteleimon is one of the    best examples of ancient one room churches.The temple is in the cemetary, where the members of the families Pragiati, Thomopoulos and Lykourezos are burried.

* ΗAi Haralabos is a deserted church of ΗAlevromagirosΘ family (this is the birthplace of the heroe of Cyprus in 1964, Dimitrios Alevromagiros).

Additionally, there are many other worth mentioning deserted churches (Ai Ilias, Panagia, etc), as well as one of the most important Vyzantine monuments of the inner Mani, ΗAi StragitoΘ or ΗAi StratitoΘ in Boularii of the 11th Cent, which is devoted to the archangel of the military christian forces.

The monument is built within a few meters on the left of while on the right, near the last house of the village, which is the stonehouse of Ladi and up to the mountainous villages, Moudanistika, Liodaki and Pepo on the left towards the mountain Laifonio and to the serene mountain Nikolakos, where one can find the glorious Vyzantine church, ΗAgioi AsomatiΘ or ΗAsomatosΘ.

This particular Vyzantine place, as it seems, used to be a monastery and it is a luxurious piece of art astonishing for the one that looks at it. It also depicts the squandering  character of the builder-founder, but above all, his good sense of taste. He is, certainly, a foreigner, since no local person would have spent all that time and money for the construction of such a monument. He must have been someone rich and noble christian who due to arrogance or respect or vow, began the construction of the monument, which was, finally, completed by the nuns who moved in it.

ΗAi Stratikos is a unique piece of work,architecturally, one of the oldest that is preserved despite its complete abandonment. At the same time, it maintained the frescos, which represent plenty of incidents and decorations in many colors, which make it unique. It is not even in those churches of Mystra, which is 2-3 Cent. older.

Unfortunately, during the last year, someone stole some frescos of Jesus and Mary from the temple.

We shall conclude in the following issue the chapter of Pano Boularii, refering to Asomato (Nikolako) and the historic generation of Madouvalei.

We are going to conclude the travel to the villages of Boularii in the west Mesa Mani referring to Pano Boularioi.

The village is built on the side of Ai Lia and on the west it is on the beach of the gorge that starts from Pepo, Moudanistika and Liodaki-real eagle ..-to end up in Gerolimena.

Pano Boularii are a typical example of traditional village. It attracted the interest of scientists, such as the National Metsovio Polytechnio. The architects M. Kavagia and Th. Giannakopoulos studied the architecture of the village before a few decades and reported:

The structure of the village is reserved, on the one hand because of the institution of Ηgenia (generation) and on the other because when a village is abandonned it is selfprotected.

All the area is full of monuments, a vast archeological place, unexplored and by consequence, unprotected. We are going to talk about the churches of the village, such as ΗSotiraΘ in the cemetary ΗPirgakiaΘ. It is a post vyzantine construction, which used to be a monastery. The stone bell tower-an extention-has an imposing presense in the village. In the inner part there are parts of wonderful frescos. What is left from humidity, time and abandonment in the built temple and the sanctuary such as Jesus, shows the excellent work and the talent of the hagiographer.

Madouvalei come from Pano Boularii, who contributed a lot to the national struggle.

Before we sum up, we have to refer to Asomato, high to Nikolako, Η a lyrical appeal sealed by the long standing silence. Alta Ann Rankins quotes:

High, in the end of the three hour uphill walk in the vastness of stones, he  intermingles in these as time weakens the parts of the building of the 9th Cent. Images of birds and animals, flowers and unusual plants decorate the iconostasis and constitute the unique presense inside the church which is rarely visited.Θ 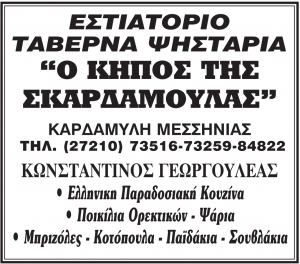