It is certain that places like Mani, which bravely faced the Ottoman threat for four centuries and maintained strong elements of autonomous action and a stable course through time, have the ability to withstand any threats of the modern times. The war in Ukraine creates powerful changes in the balances so far, political, social and economic, whose repercussions reach even the smallest regions of the world, such as Mani. The challenge is to absorb the shocks caused to the balances that have been created so far and to find the tools that will be needed, given that in our time the means of dealing with new risks have changed radically. The search for new means, however, can focus on the foundations created by the epics of our ancestors: spirit and unity in action.

Before the 1821 revolution, the family economic balances in Mani were mainly based on the income from the men’s warfare and the women’s industriousness. The men collected war booty through expeditions to the sea and on land, while the women supplemented the family income by intensively cultivating the barren land and raising animals, either penned or free range. If no family financial balance was achieved, the solution was to supply labour, male labour for the heavy jobs and female labour for the lighter ones, in the neighbouring fertile plains of Messinia and Laconia.

With the establishment of the modern Greek state, Maniots exploited their natural aptitude to warfare, and a significant number of our compatriots were hired in the army and police forces. Thus was created the first migration flow to other urban and semi-urban areas, which continued unabated during the next century as a result of overpopulation, family conflicts and civil wars. Seasonal migrations during the growing and harvesting seasons also continued for a century and a half in the neighbouring fertile areas, which, in combination with the agricultural and livestock activities, balanced the family budget.

Since the last two decades of the 20th century, the number of visitors to our area began to rise, which in many cases led to the choice of longer stays for visitors. The main factors contributing to the continuous strengthening of these trends were the globalisation of markets and the improvement of air and road transport, which provided the opportunity to travel long distances at a reasonable cost and to get to know places with the quality characteristics of the geophysical landscape and climate, such as the diverse regions of Mani. In addition to the rise of the economy in our region, retired compatriots are resettling here and renovating their family home or constructing new houses to enjoy the quality characteristics of Mani’s nature and mild local climate.

The war in Ukraine has come to upset the general economic balance, and this turmoil tends to also spread to individual regions such as Mani. Inflation, which keeps rising dangerously, is reducing the stable incomes and purchasing power of employees and pensioners, while at the same time, due to the uncertainty of the war developments, it is creating a halting trend in the tourism sector. In view of these situations, each region is looking for ways to compensate for any losses from its up-to-now stable economic situation.

In our region, balance can be achieved by exploiting its underutilized productive potential, but also by effectively claiming funding and implementing public investments that contribute to adding value to its geophysical characteristics.

Agriculture, especially olive growing, livestock farming, both domestic and free-range, and beekeeping, have failed to exploit the full potential offered by the olive groves and the varied and extensive grassland areas of the Mani region. Increasing the area of family farmland, through purchases and rentals, can provide a strong family economic balance, combined with income from the tourism sector through supply of labour or short-term rentals of accommodation to visitors.

The coordination of actions of local representatives to promote the necessary public investments that benefit everyone, especially in road projects (and in particular in the main road axis Kalamata – Kardamili – Areopolis – Gythio – Sparta) and in cultural monuments, is bound to increase the visitor numbers in our region with the consequent general strengthening of its economy. In fact, with the combination of the on-site availability to the visitors of the agricultural production of the area, the local economy can be boosted even more.

The extraordinary and uncertain situations that we are experiencing today require us to remember the attitudes of our ancestors when they were called upon to face high-risk situations: spirit and unity in action. 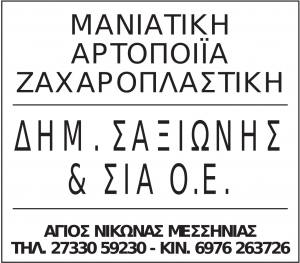