Areopoli is the centre of the so-called Municipal Compartment and governmental centre of Vytilo. It has 988 residents and consists of the villages Drialia, Lagokilia, Limeni, Omala and Sotiras. It is built in the centre of the peninsula of Mani on the south part of the big gorge that divides mountain Taygetus in two; it sits in between Vytilo and Diro on the foothill of the mountain Prophet Elias on a rocky place with view to the west side to the Messinian bay.  It is in fact, the end of the main road to the South and South West part of Mani.

The Palaeolithic proofs in Apidima and Kalamakia, as well as the megalithic remnants in the west part and the interesting cemetery of Aghios Polikarpos show the long lasting course of the city.

In 1336, Tsimova, as it used to be called, was occupied by N Atzagioli.

In 1618, the village had 70 families and in 1700 it had 146 families (590 residents). Nik. Nifakis refers to them as merchants and pirates and as followers of love and freedom. This is depicted in the following verses:

“Tsimovites are the only good people. Their customs and good manners prove so. They are overtly merchants and secretly pirates. They can be ungrateful, inhuman, liars, cunning and flatterers. These characteristics are the result of disobedience that is the result of ignorance that is the result of discord and superstition. They believe they are free like their ancestors, which is a foolishness. This is the reason why they do not want to submit to others and they never agree with the great ones. When a foreigner wants to invade their country, then, they fight united for freedom.”

The town was named Areopoli after the liberation, in 1836. During the last three centuries, Areopoli became an important centre of commerce under the government of Mavromichalis family, who made important improvements to the village, such as churches and houses.

Taxiarches (1798) is the metropolis of Areopoli and sits in the historical 17th March 1821 Square. It has an important sculptured temple and exquisite decoration with stones. The tower bell of the church was built later and became the distinguishing mark of the town. The small and simple churches, such as Aghia Triada (before 17th Cent.), Aghia Kyriaki and Aghios Petros, on the west part, impress the visitors. Additionally, Aghios Ioannis Prodromos (beginning of 18th Cent.) that has wonderful frescos, Panagia Jeorjianiki (middle of 18th Cent.) and Aghios Nikolaos (1807) that has a twelve-sided dome and a wooden separated place for women. The double temple of Panaghia and Aghios Charalabos on Niarchakos’ square has frescos of 1869 and a tower bell and finally, Aghios Athanasios church on Athanatoi Square. These are only a few samples of the religious faith of Areopoli.

Eminent residencies that combine organisation with marvellousness take us back to the glorious past. The Complex with the built fence that belongs to Stylianos Mavromichalis, the three floor Kapetanakos tower that became (1976-79) a guest house by EOT, and the five floor Barelakos tower are monuments and have been characterised as the best buildings of architecture in Mani.

Areopoli took part in Orlofika (1770). Petrobey Mavromichalis was captain in Areopoli and then became Bey of Mani. He was the first colonel of the Greek troops during the revolution, president of the 3rd Constitutional Assembly, counsellor and senator. His offer as well as the offer of his family takes the first place in the national conscience. Maniates started from the church Taxiarches at the 17 March 1821 Square for the liberation of Kalamata and Greece.

Nowadays, Areopoli has expanded to the east and developed to a significant commercial centre with active market, which is important for all Mani without losing its colour as it was formed through centuries. 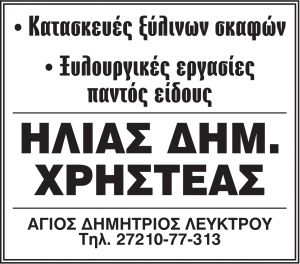